What’s Good About LaVivid Hair and What’s Bad About It?

Hey guys, I am James. Today's video is going to be about this new system that I have in my head from LaVivid Hair.

I ordered two hair systems from LaVivid hair and they came really well packaged they have a really nice box on them. They are really good stuff. I just wanted to say to you guys that there are lots of companies out there that sell hair system less than 200 pounds. When LaVivid Hair got in contact with me, I thought it was an opportunity too. So I can test their products and give you guys an honest review. If they're no good then I'll tell you guys but if they are good then I'll tell you. So I took the moment to learn and yeah they are great quality. They are comparable to the 300 pound systems that my hairstylist was buying in from America and that I was wearing before. So that's great. It is fantastic but there's more to it than quality how easy are they to work with how long do they stick when you have or do they look like all that kind of stuff and as you guys can see from this system here I think it looks pretty good. 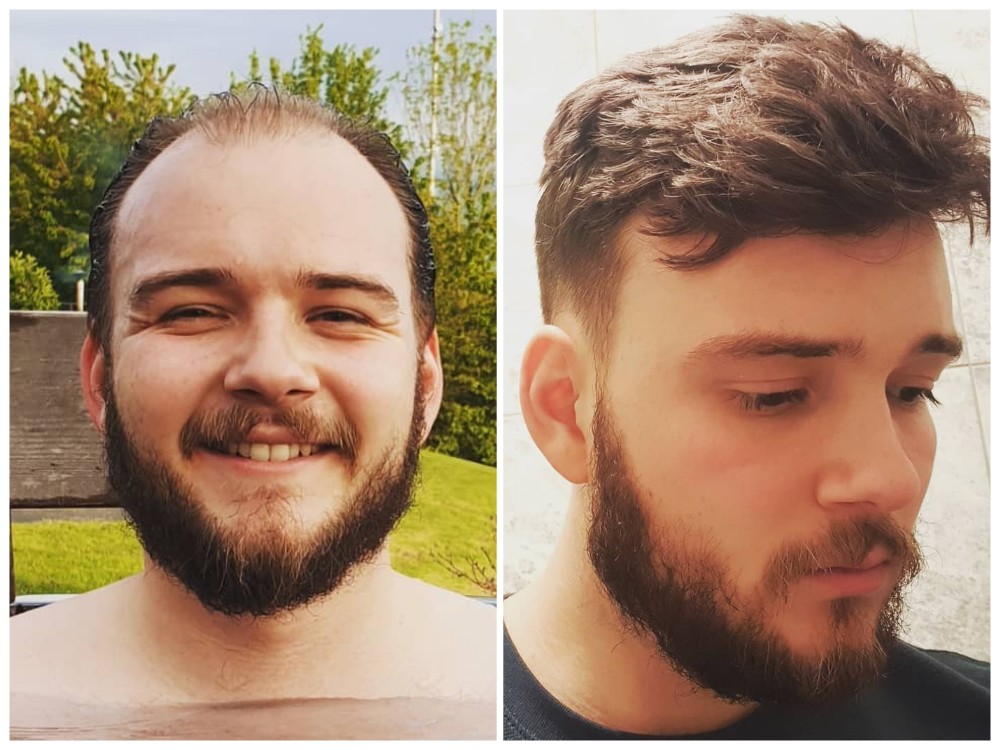 It's so comfortable and it's actually quite a lot lighter on my head than my last system. I'm finding that I'm less sweaty and then it's less irritating.

At the moment there are two problems that I have with this system.  The first one was that I used tape and glue. For the first time the tape just didn't want to stick to the system. We tried it two times. We line the system twice with the tape but it just did not want to stick to it. Then we gave the base a mini soak in a bit of 99% alcohol and gave it the scrub and finally made it work. Actually this is because of this very conditioner on them to keep them in good condition when they're in the warehouse and it's just something to be aware of. It's probably not even a criticism really I would prefer them to spray them with conditioner and to keep them in good quality but it's just to be aware of the fact that you will need to give it clean before you and try and apply it.

The second one is that the color compared to my last system, this one is more kind of one color. This is fine but it looks a little bit actually there's no your kind of flex in the system's color. So I would say my only real criticism is that you probably want more natural flex within the system itself. However as you wear it as you wash it and you could color it if you want but as you're wearing and you naturally kind of go into sunlight and wear it on a day to day basis those effects will appear anyway and those kind of color differentials will appear.

Tina who I was speaking to from lavivid hair was so helpful. It's obviously really difficult to get a color match on photos from somewhere in America and here in the UK but between us we were able to exchange pictures and we were able to find the perfect match in this system is perfectly match in my hair absolutely perfectly which is exactly what you want.

I'm a lot happier with this system than I was my last one. Most of the blame can be put on me for having that system cut too shot. I didn't look after it properly. I didn't know how to look after it. There's a big learning curve so it's been eight months with my first system. If I looked after it properly, I reckon I could got four or five months more out of it.

I hope this has been really useful for you just seeing what it's like for me to get a new system and the steps I go through but also how good the lavivid systems are and the fact that you don't actually have to spend a lot of money. The hair system itself costs less than 200 quid and that's so cheap for eight to twelve months worth of wear which I will aim to get out of this. I had to pay the solid couple of hundred quid to the salon to fit it. That's not a huge amount of money and it is so worth it.

This is the review of lavivid hair system video, check out now.

If you need any assistance in picking a right style, please contact support@lavividhair.com and their experts will walk you through the whole process. Thanks to LaVivd hair again, I am very happy with them.